Exposure to poison ivy, oak, and sumac causes an estimated 10 – 50 million cases of contact dermatitis per year. This itchy, blistering, hot rash can be especially unpleasant for children. Kids may not be able to stop themselves from scratching the rash, and may not understand the idea that it’s only temporary and will pass. Reassure them that while it feels like the rash is lasting forever, it will probably be gone within a week or so.

This post talks about some ways you can protect your kids from poison ivy before it occurs, including a homeopathic remedy that can be given for long-term prevention. Topical treatments can be helpful for cooling the area and decreasing itchiness, and there are lots of options – most of which are common household items.

Preventing exposure to poison ivy can be tricky with kids, because they may not be old enough to know that they shouldn’t dash into a weedy patch without checking for it first. When your children are old enough, teach them what it looks like and encourage them to avoid it. If you know you’ll be in an area with poison ivy, dress your child in light-weight long pants, socks, and close-toed shoes (boots ideally). I know it’s summer time, but covering up helps prevent exposure to both poison ivy and ticks, and neither are things you want to mess with.

The rash is caused by an oil in poison ivy, oak, and sumac called Urushiol. If your child is exposed, put vinyl gloves on and wash the area with lukewarm soapy water, ideally within 20-30 minutes of contact. If possible, give your child a full shower just in case some of the oil was transferred from the exposed area to a different body part, and be sure to scrub under the finger nails.

The plant Jewelweed has been used topically by Native Americans for hundreds of years to both prevent and treat poison ivy. Jewelweed contains something called saponins, which act as a soapy substance to break down poison ivy oil. Using Jewelweed soap after exposure has been shown to reduce poison ivy rash. If you are hiking or in a remote area where you don’t have access to water, spraying an exposed area with Topical Jewelweed Spray can help remove Urushiol. You can continue using the soap and spray until the rash is gone, as Jewelweed is also a great treatment for poison ivy.

The oil from poison ivy can remain on clothes and shoes for up to five years! Toss clothing and washable shoes in the washer and do two cycles for good measure. If the shoes aren’t washable, wear vinyl gloves and thoroughly clean them with rubbing alcohol. If you didn’t know your child was exposed until a rash appeared, wash all their bedding and clothing that may have been exposed to the oil. Animals can bring the oil in on their fur and claws (pets don’t get the rash), so if your animals get into poison ivy, put on some vinyl gloves and give them a good washing.

The first time your child is exposed, they may not develop a rash. The rash usually appears 12-72 hours after exposure, but can take up to a week to appear if it’s their first rash. It typically lasts 1 week, but can last up to 3 weeks. You may have heard that scratching the rash can spread it, but what looks like spreading is actually a delayed reaction to the oil. Scratching, however, can cause an infection, so put socks on your child’s hands at night if they are likely to scratch a lot in their sleep (same for adults). Poison ivy is not contagious, even if someone else touches the rash or the fluid from a blister. A person has to have been exposed directly to the oil from the plant in order to get the rash.

Topical treatments will likely need to be done 3-6 times per day during the height of the rash. Most of the treatments are done with items you probably already have at home. These topical treatments cool the rash, decrease itching, and also work to heal the rash. Baths should be done with cool water, since heat will make the rash worse. Since young kids may want to touch topical applications and put them in their mouth, I’ve selected things that aren’t harmful if ingested in small amounts, but don’t let them make a meal of it 😉.

Here’s a video demo of how to make a compress by one of our affiliates, Mountain Rose Herbs.

Rhus Toxicodendron (aka Rhus Tox) is a homeopathic preparation of poison ivy. Homeopathy uses very small doses of substances to stimulate healing in the body. Here’s a great explanation of how homeopathy works.

Some kids are especially susceptible to poison ivy, either because they spend a lot of time outside or because they aren’t very aware of their surroundings (they are kids after all!). The rash can be really hard to tolerate as a child and can keep them out of commission when they’d rather be having fun. Oh, and the sleep deprivation that can come with it! Rhus Tox has long been used as a preventive remedy for poison ivy with good success. One study looked at giving homeopathic Rhus Tox to people who worked outside and couldn’t avoid being exposed to poison ivy. They took the remedy for the duration of poison ivy season. Nearly 77% of patients either had no poison ivy that season, or had milder attacks. Homeopathy is really easy to take and it tastes great. The preventive dose is just one pellet per month during poison ivy season. So easy!

Preventive Dose of Homeopathic Rhus Tox 30c: Let 1 pellet dissolve under the tongue once per month from March to November.

Rhus Tox is also a great treatment for acute poison ivy. I love using homeopathy in kids because it’s so easy to take, and when you find the right remedy, it works really well. Rhus tox is a great remedy for the rash that feels worse when scratched (usually scratching provides relief), and stings and burns, especially at night. It is great for a restless child who never keeps still, even while sleeping (constant tossing and turning) and who tends to be on the chilly side. Dosing of Rhus Tox for acute poison ivy differs from person to person, so check with your Naturopathic Doctor about what dose is right for your child.

When to See a Doctor

Most cases of poison ivy can be safely treated at home, but if any of the following are the case, see your doctor:

If your child experiences any of the following symptoms, go to the emergency room right away:

Dr. Michelle Haff is a Naturopathic Doctor at Lilac Natural Medicine in Manchester, New Hampshire. Her practice focuses on Pediatrics, Infertility, GI Health, and Women’s Medicine. She is a Primary Care Provider for the whole family and loves treating kids from pre-conception into their teens, as well as adults of all ages. Schedule with Dr. Haff at <a href="http://www.lilacnaturalmedicine.com">Lilac Natural Medicine</a> in Manchester, New Hampshire. 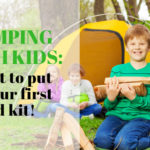 Camping with kids: what to put in your first aid kit!